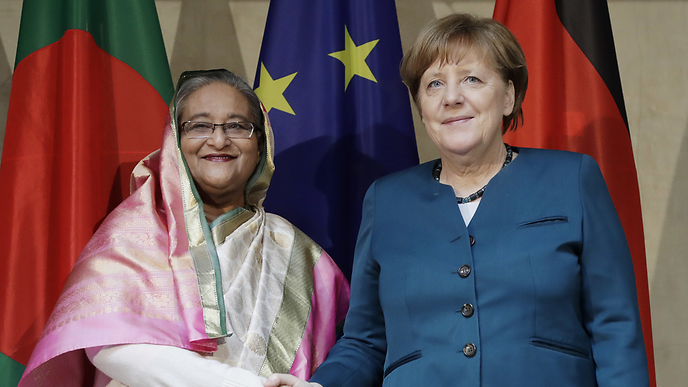 Germany was one of the first European countries to recognise Bangladesh’s independence from Pakistan, the then German Democratic Republic (East Germany) on January 11 and Federal Republic of Germany (West Germany) on February 4, 1972 establishing diplomatic relations, and is respected as a long-standing and reliable partner, particularly in development co-operation and trade. Germany is also an important member state of the European Union.

Germany is one of the biggest export markets for Bangladesh with continuous growing trends. Over 90 percent of imports from Bangladesh are readymade garments. Some other major export items to Germany include frozen foods and leather goods. German export to Bangladesh consists of predominantly of machinery, advanced chemical and electrical goods.

The German Academic Exchange Service (DAAD) and other organisations award numerous scholarships to Bangladeshi students and young researchers each year in order to promote the academic exchange between Germany and Bangladesh.

Bangladesh is among the countries engaged in close development co-operation with Germany on the basis of intergovernmental agreements jointly agreed priority areas including renewable energy, energy efficiency as well as good governance and adaption to climate change.

In the area of good governance, a particular focus is given on promoting labour conditions in the factories as well as environmental standards in industrial production, particularly in the areas of textile and leather industries. This is a decisive aspect for the country’s further development especially with the importance of the export-oriented textile industry in mind.
Germany is also supporting Bangladesh coping with the Rohingya, who have fled from Myanmar through humanitarian assistance.

Germany is Bangladesh’s largest export market, recently overtaking the USA. The volume of bilateral trade is continuously growing, reaching a total of 6.6 billion euros in 2018. Bangladesh exported to Germany goods worth approximately 5.8 billion euros, while it’s imports from Germany amounted to only around 0.8 billion euros.

Textiles account for over 90 percent of German imports from Bangladesh. Other exports to Germany include frozen foods and leather goods. Germany’s main exports to Bangladesh are mainly machinery (more than 50 percent of total exports), advanced chemical products (17 percent) and electrical goods (11 percent).

German companies have invested in Bangladesh, particularly in the textile, transport, energy, logistics sectors and the building materials industry.
A bilateral investment promotion and protection agreement has been in force since September 1986 and a double taxation agreement since 1993.

The basis for Bangladesh-German development co-operation is the Agenda 2030 for Sustainable Development Goals (SDGs), which plays a pivotal role in the development of the country. Reducing poverty and inequality as well as achieving sustainable development within planetary limits are fundamental challenges that need to be tackled jointly.

The Agenda 2030 of the SDGs and seventh 5-Year Development Plan of Bangladesh continue to be the main framework for Bangladesh-German development co-operation. On this basis the areas of co-operation are:

Besides bilateral co-operation, Germany is contributing to multilateral co-operation through multilateral institutions such as the European Union, the Asian Development Bank, the United Nations, the World Bank Group, the International Labour Organization and the Food and Agriculture Organization to name a few. Civil society organisations also receive German funding to implement development Projects in Bangladesh.

Most recent Bangladesh-German Consultation, a regular procedure for bilateral co-operation, held on the 2nd March 2020 at the Economic Relations Division (ERD) of the Ministry of Finance of the Government of Bangladesh in a bid to further boost bilateral relations as well as to boost co-operation in a wide range of areas including in renewable energy and climate change, headed by the ERD Secretary Ms. Fatima Yasmin and German Ambassador to Bangladesh Mr. Peter Fahrenholtz for their respective governments.

The Head of South Asia Division of the German Federal Ministry for Economic Cooperation and Development (BMZ) of Germany Dr. Ute Heinbuch addressed the inaugural session of the consultations.

Renewable energy and energy efficiency, justice system reform and human rights, adaptation to climate change in urban areas, biodiversity, social and environmental standards in the textile sector, Rohingya crisis in Cox’s Bazar district ‘Supporting Host and Rohingya Communities’ were some of the main topics of discussion at the consultation. After the day-long consultations, both sides signed a joint statement.

Prior to Bangladesh-German Consultation the Federal German Minister for Economic Cooperation and Development Dr. Gerd Müller visited Bangladesh on February 25-26 when he made it clear that Germany would stand beside the government and the people of Bangladesh on the Rohingya issue, according to the German ambassador to Bangladesh, who accompanied the minister during visit to the Rohingya camps in Bangladesh.

“Myanmar must do all it can to protect the Rohingyas and to facilitate their voluntary return,” he said wrapping up his two-day visit to Bangladesh, including the largest Rohingya refugee camp in Kutupalong.

“I have spoken to Rohingya women today, who have experienced immeasurable suffering. Here in Kutupalong, 800,000 Rohingya people are living in straw huts under the most basic conditions in one of the world’s largest refugee camps,” said Minister Müller. He further said that the international community must act much more decisively in this matter, and take a greater interest in the Rohingya’s fate, according to his statement.

Germany committed 15 million euros additional funding for education and sanitation measures to help the Rohingya refugees living in the camps in Bangladesh as well as the communities hosting them.

Soon after his return to his office Minister Müller announced suspension of all development co-operation with Myanmar adding that the suspension would continue until Myanmar allows Rohingyas to return to their homes in Rakhine State safely.