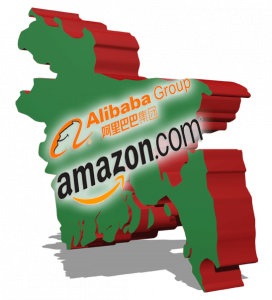 The postal division is going to collaborate with global e-commerce giants Alibaba and Amazon to deliver their products across Bangladesh, reports the Daily Star.

A pilot project will be launched within a short time, said Tarana Halim, state minister for telecom and postal division, after a meeting with the postal department yesterday at her office.

“We want to establish local and international partnerships, which will help increase the postal department’s revenue and make it self-dependent,” said Tarana.

Susanta Kumar Mandal, director general of the postal department, said they will start the pilot phase with the two global companies in the first week of March.

If they get a positive response, they will sign an agreement in April. In November last year, the postal department launched postal e-commerce services in 20 post offices in Dhaka, which was the first such service under any government entity in Bangladesh, said a top official at the programme.

Through this initiative, online buyers are now able to receive their products from e-commerce sites, delivered to their doorsteps in Dhaka.

“Using the postal services, we can deliver products to people living in the remotest areas.”

Tarana said they are also working to allow customers to use their mobile phone balance for purchases from e-commerce platforms.

The government has also planned to expand electronic money order services to the remotest parts of the country. The postal department has a huge range of services. However, there is no publicity about those. With the launch of the services with Alibaba and Amazon, they now plan to spend more on campaigning, said Tarana.

At present, there are 500 e-commerce sites in the country and another 1,000 entrepreneurs are running their business through Facebook.